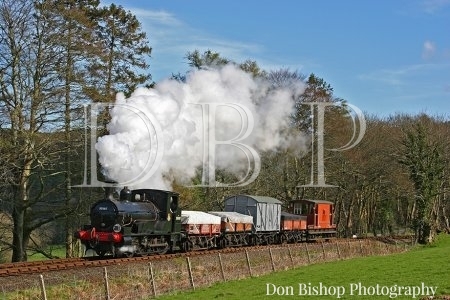 A day on the Bodmin & Wenford Railway recreating a classic Cornish steam scene.

I am very pleased to be able to announce a day on the very friendly and enjoyable to visit Bodmin & Wenford Railway in Cornwall on Monday 9th April 2018.

We will be recreating the classic Cornish branch scene of the 1874 built Beattie Well Tank No. 30587 on the daily goods from Wadebridge to Wenford Bridge, which of course passed through Boscarne Junc, on today’s heritage line, on its daily saunter through these rural parts of Cornwall. We will have the BR liveried Beattie Tank on short goods including the railways appropriate clay wagons and one or box vans, with the train formation possibly being changed during the day.

We will start from Bodmin General at 08.00hrs and have exclusive use of the line until the lines daily service commences mid morning when we’ll return to Bodmin General for a short break. After this we can run around the public service, using the other part of this unique heritage line which has two separate lines splitting at the junc outside the ‘General station, if the weather is suitable. We will later have exclusive access to the full line again for the late afternoon/early evening period.

This was a major draw to enthusiasts & photographers in the 1950’s and early 60’s before the three ancient tanks were replaced by ex GW 13xx Pannier tanks. With the early spring light and trees starting to come into leaf this could prove a very evocative day recreating a real classic Cornish steam scene.

“Bongo on the Teaks”
This site uses cookies: Find out more.
Scroll to top